The trigger finger itches.  The truck is loaded.  The dog is trained.  The call are on the lanyard.  The shells are in the bag.  The gun is ready to rock.

And there are a few birds in the area.

Yes, it is a special time of the year.

Shooting time is 7:02am tomorrow.  I'll be there with call on.

and I know it.

But quite frankly, as crappy as life has been over the last month, I just haven't felt much like talking.

In case you haven't noticed, the economy still sucks major monkey balls.  It is better, but unemployment is up around 10%, markets are still down, and the family business is still losing money.  FY2009 was a $300,000 loss on $950,000 in total revenue.  Then, we had been working since late August on preparing a grant application for ARRA funds to increase our efficiency.  Currently, our recycling center processes 2.5 tons/hour.  Originally, we thought we could find enough material to increase that production by 8-10x's.  A big key to this increase was the city of Peoria starting a curbside recycling program of significance.  That didn't happen.  The program that was selected is nothing more than a warm fuzzies program.  And after that, all the pieces of our program started to fall apart.  By the time we got down to a week before applications were due, we were planning to install a system that could potentially quadruple our through-put but we only could identify sources for a doubling, at best.  Finally, last Monday, we found a short sentance that derailed the whole plan.  Projects were only able to apply for 50% of total project costs, and costs had to be incurred after the middle of February, 2009.  Which for us, meant we only had $200,000 in equipment to put against the total project cost on our half.  This meant we would have to get financing for about $1,400,000.  Not a possibility.  So, we had to abandon applying for the ARRA funds.  This was a major blow to my folks.  First was anxiety, and then depression.

And on the other side, the weather this fall SUCKS!!  Here were are at the 27th of October and we only have 82 acres of soybeans harvested and fewer than 40 acres of corn.  It rained all night Sunday.  There is more rain in the forecast. We still have over 300 acres of beans to harvest and over 200 acres of corn.  At this pace, we will be lucky to be done by Christmas.  We harvested Sunday, for the first time in a week.

Basically, please pray for my family.  And all the farmers right now.  It is going to be a really rough and long harvest.
Posted by Petey at 11:42 PM 1 comment:

A Hero Is Called Home

Friday afternoon, October 2, at approximately 5:00pm, an American Hero was called home.  He is my Great Uncle Bruce.  Born in a small farming community in central Iowa, Bruce was a boy when the United States was attacked on Dec. 7, 1941.  His father had taken him, his sister (my grandmother), and several other kids sledding that morning after Sunday School.  At the age of 17, he wanted to enlist in the Marines, but great-grandma wouldn't have it.

So Bruce was drafted into the Army, in a delayed deployment program that was going to send him to college prior to deployment and then bring him in as a 2nd Lieutenant.  But just a couple of days before Bruce was to begin classes at the University of Oklahoma, the whole program was cancelled, and he was on his way to Europe.

When he crossed the Channel, he landed at Utah Beach (not on D-Day) and began the move through.  He was captured during the Battle of the Bulge and taken to Stalag 12A in Germany as a P.O.W.  On April 12, 1945, the Stalag was liberated by the English 7th Armoured Division.  Until his passing, Bruce still had the boots and uniform that were provided by the 7th upon liberation-the first change of cloths or shoes since early January at his capture.

Bruce was awarded 2 purple hearts and 2 bronze stars for his service.

After returning home, he met a wonderful woman, who would become his wife for over 52 years.  They had one son, and two grand-daughters; the oldest of which was married two weeks ago.  Bruce was at the wedding.  The next morning, he began a two weeks of illnes, which ultimately took him home.  He was coherent, giving orders all the way to the end, and told his son on Friday that he was ready to go home.  His wife passed a couple of years ago, and Saturday, October 3rd, was their wedding anniversary, for which they are back together.

It took Bruce over 40 years to talk about his experiences in World War II.  He was an ardent advocate for Veterans, especially in the Des Moines area.  He served on the committee for the first state or national World War II Memorial, which is located on the state capital grounds in Des Moines.  He served as Master of Ceremonies at its dedication.  Follow this link to see pictures of Veterans Day Services at the Memorial.  Bruce is the 3rd from the right in the first two pictures, and 2nd from the right in the third picture.

It is always sad to lose a dearly loved family member, but our entire family takes comfort in knowing he has gone home to his Savior, and is reunited with his loving wife.  We take pride in know that he was a great man, and that we had the honor of being his family.

Bruce you will be greatly missed in this life, but we will see you again, soon.
Posted by Petey at 11:51 AM 1 comment:

Is it a Platinumed Golden Anniversary?

250 years ago, history was changed forever.  Arthur Guinness signed the lease on the St. James Gate Brewery in Dublin, Ireland.  And more importantly got the water rights on the property.

And so today, We all must raise a glass to Arthur.

I haven't posted one of these for a few weeks.  My heart just wasn't in it.  But tonight seemed like a good night to get back in the swing.

When I started rendezvousing in 1998, one of the greatest things about it was sitting around a fire listening to music (this is not to say that there isn't still good music, because there is, but I am now part of the performance instead of just a wide-eyed kid wishing I could be that good).

I remember one night in particular at the Galesburg Heritage Days Rendezvous around 1999.  We were still camping West of the main pavillion and on Saturday night, there was a good group sitting around doing music.  Somebody asked Rod and Ollie to do an old Smiley Bates tune, Bringing Mary Home.

The song is the story of man driving down a lonely road when he see a girl in a formal dress along the side of the road.  The driver stops to pick up the girl and take her to her home.  They drive down the road and the girls tells the man to pull into a driveway.  But when he stops the car, the girl is gone.  He goes up to the house.  He tells her the story and the woman smiled, and told how her daughter had been killed 13 years ago, and every year, someone brought Mary home.

The story is loosely based on a Chicago area legend and one of the most famous ghost stories in the country.  The story of Resurrection Mary.

This song is still one of my favorites and every time I hear it I am taken back to that rendezvous where I first heard it, and then I picture myself on the dark, dusty, lonely road and bringing Mary home.

I'm beginning to really question what kind of hunting dog Omar the Wunderpuppy is really going to become.

I headed down to Gobbler's Knob Hunting Reserve between Canton and Banner, with 3 purposes.  Number 1: Clean the clubhouse for next weekend's test.  Number 2: Help anybody that showed up in their preparations for the test.  Number 3: Put out some birds to work Omar on and see if I could get him to connect all the elements, point, bird flushes, shot, and retrieve.

2 chapter members showed up to prepare for their text nest week.  Both are running Natural Ability, both dogs are Wirehaired Pointing Griffons, both dogs are from the same litter, but the owners did not know each other until last month at another training day.

Primarily, both of those owners wanted to work on the track portion.  So they got a couple of pheasants and one of the more experienced members of the chapter and I set the birds out.  One dog did a really great job, the other didn't do terrible, but it fell short of good.  All in all, I think they will do alright.  The only thing that matters is that the owner is happy with the performance and uses the test as an opportunity to evaluate where they need to focus training.

The other person there had his German Shorthaired Pointer which he is trying to get to become more steady.  The dog points very nicely, but as soon as you make a step, she wants to break in on the bird.  He worked the dog on three or four birds.

Finally, I wanted to get birds in front of Omar and get him ready for hunting season. He has a good strong point, and does a nice job of retrieving when we train at home, but at the last training day, we would point but I couldn't get him to follow up with a retrieve to hand.  He just didn't seem interested then.

Not a problem yesterday.  I put out 6 chukar partridge, in 2 differnt set-ups.  The results were spectacular.  On the last bird, I had one of the other guys take some photos for me. 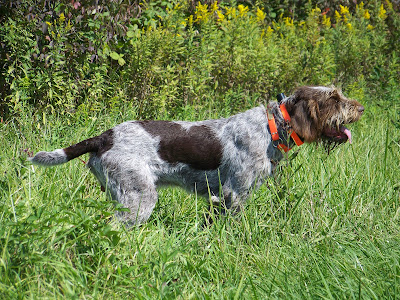 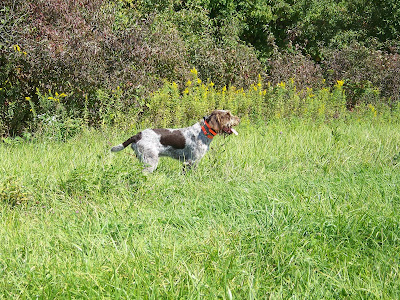 Another of Omar on point. 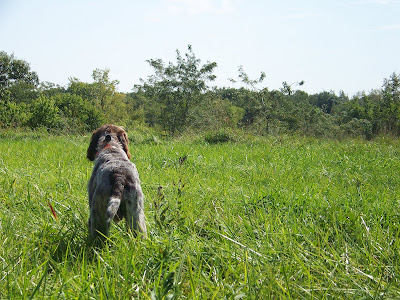 On Point.  Can you tell where the bird is? 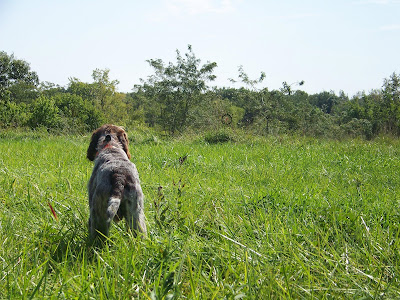 The circle in the center of the picture is around a blaze orange clothespin.  This marks the location of the bird launcher.  It is about 30' in front of Omar. 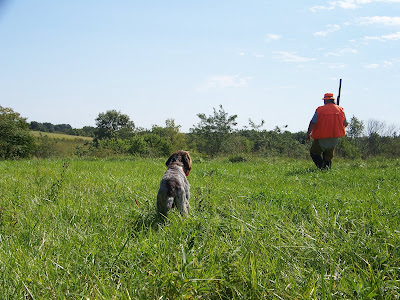 I'm moving in to flush the bird. 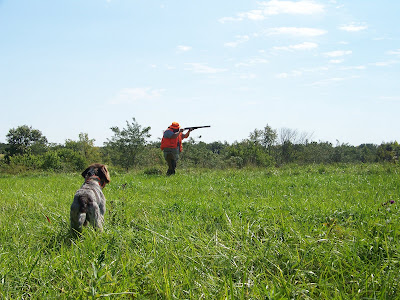 After the flush, taking down the bird. 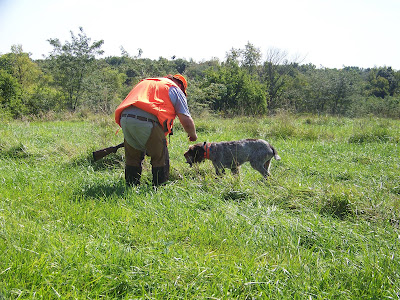 And a retrieve to hand.

The great thing about this is the way Omar reacts.  If you notice in the pictures after I move in and the bird has been flushed, Omar is still standing in the same location.  When the bird is shot, he STILL didn't move.  Finally, just as the bird hit the ground, Omar broke from his point and moved in on the dead bird, which he retrieved to hand.

Man, that was FUN!

So do you think he is going to be a decent bird dog?