I logged on to YouTube tonight and saw a video that caught me off guard. It was about the release of "The Last Session: A Fond Farewell." A new CD by Ronnie Drew, released this month, following Drew's death August 16th.

I never heard that Drew had passed. Damn.

For those of you who don't know the name Ronnie Drew, he was one of the founding members of The Dubliners (originally known as the Ronnie Drew Group), one of the most famous Irish bands in the world. Luke Kelly was also a member of The Dubliners, who made an appearance in a Great Music Monday post and are on the list for several more visits.

Here a a few videos of Ronnie to appreciate.

First, very old footage of the Ronnie Drew Group performing McAlpine's Fusiliers. Drew is the singer sporting a dark and short beard which would become a sort of trademark for him over his life.


This next video is of Ronnie from the documentary movie The Dubliners' Dublin" which is described as a tour of great watering holes. "In the Rare Old Times."


Next, is one of MANY collaborations The Dubliners did. This one is with The Pogues performing "Irish Rover."


In 1995 Ronnie left The Dubliners and recorde solo. This video is of a St. Patrick's Day performance in London in 2003 of "I'll Tell Me Ma."


And finally, a tribute to Ronnie released actually shortly befor his death. This video is a bit of who's who of music from Ireland. U2, The Pogues, The Corrs, of The Dubliners, and several others that I don't recognize right off hand, performing as a tribute. "The Ballad of Ronnie Drew." 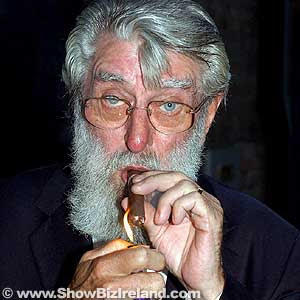